You are here: Home / Food Shelf / Highlights from the General Vang Pao Ceremony

Last Friday, I attended the opening parade of the Soul Release Ceremony for General Vang Pao, a hero to the Hmong people.  Here are a few photos from the parade, along with some interesting facts I learned from Bao Xiong, our Food Shelf Coordinator at HQB.

General Vang Pao was the first person in 500 years to unite the 18 Hmong clans in Laos.  Following the Vietnam war, he founded the Hmong 18 Clan Council  in Fresno, California in order to preserve Hmong culture and resolve disputes among Hmong refugees.  Each of the clans was well-represented last weekend. 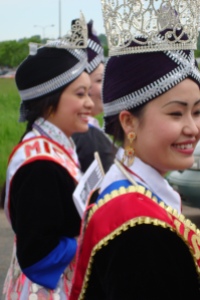 When the parade began, these boys played the wooden flutes slung around their shoulders.  Unique to the Hmong culture, the “qeej” (pronounced “gaeng”) flute captures what Wikipedia describes as the “lyrical qualities of the tonal Hmong language.”  The flute is used to welcome the spirit of General Vang Pao.

The boys dance as they blow into their flutes.  Dancing symbolizes the joy they feel in the presence of GVP’s spirit.

The front of the parade.

At the back of the parade, a house of silver and gold paper (“kauj vab,” pronounced “gao wa”), believed to contain GVP’s spirit, is carried.  After the three day soul release ceremony is complete, the paper house is burned, so that GVP can take the silver and gold with him to heaven. 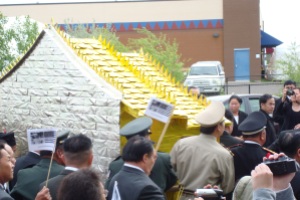 Another shot of the house of silver and gold.  Within the house is a very thin basket, on the top of which sits GVP’s army hat and jacket. 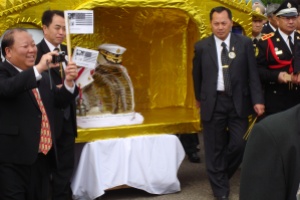 A man looks at photos of GVP in the gallery room of the building where the ceremony was held. 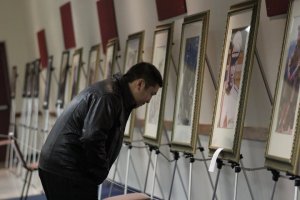 The woman holding the hat is GVP’s widow.  She is welcoming him and preparing for his spirit’s release.

For more information about General Vang Pao or the Hmong people, visit the GVP Memorial website or stop by the HQB food shelf and talk to Bao.

This is the last week of the Open Your Heart Campaign! We’re $2,000 away from reaching our $9,200 goal in honor of 92 years of serving the community. We are all in this together, can we count on you to make a donation to ensure our community has the food resources they need? Donate today using the link in our bio!
At age 5, Wilma Rudolph contracted Polio, severely impacting her left leg and foot. Through weekly treatments and massages, Wilma was able to recover and walk without a leg brace by age 12. During her junior year of high school, she competed in her first Olympics in 1956, making her the youngest member of the U.S. Olympic team and earning her the bronze medal. During her second year at Tennessee State, Rudolph qualified again for the 1960 Olympics in three events. She ended up taking home the gold in each event she qualified for, making her the first American woman to win three gold medals in a single Olympiad. Good luck to all the athletes competing in the 2021 Tokyo Summer Olympics!
The Open Your Heart campaign is in full swing and we’re $3,000 shy of reaching this year’s goal. Our Center is the cornerstone of the community and we want to ensure that everyone who walks through our doors gets the services and food they need! Donate today using the link in our bio, funds will be matched up to $4,000!
The National Association of Colored Women (NACW) is celebrating their quasquicentennial today! Black women were often left behind during the women’s rights movement, so 125 years ago, Harriet Tubman, Margaret Murray Washington, Frances E. W. Harper, Ida B. Wells, Mary Church Terrell, and other trailblazers established the organization to advance the rights of black women. Our namesake, Hallie Quinn Brown, served as President of the organization from 1920-1924, and just like her, Hallie Q. Brown Community Center will continue to fight for the rights of all!
Rondo native, Debbie Montgomery was recently presented the Community Builder award from Northern Star Scouting for her outstanding leadership and commitment to the Saint Paul community. Congratulations, Debbie! Click the link in our bio to watch the full award recognition video!
After a long year away from our friends, we are excited to get back out in the community for the 2nd Annual Raising Rondo with Saint Paul Firefighters United. Stop by Hallie Q. Brown Community Center’s parking lot tomorrow at 11:00 AM for free essential needs! We’ll have food and other basic necessities available until supplies last. This event is free and open to all!

The mission of Hallie Q. Brown Community Center, Inc is to improve the quality of life in our community by providing access to critical human services, fostering and promoting personal growth, and developing community leadership.